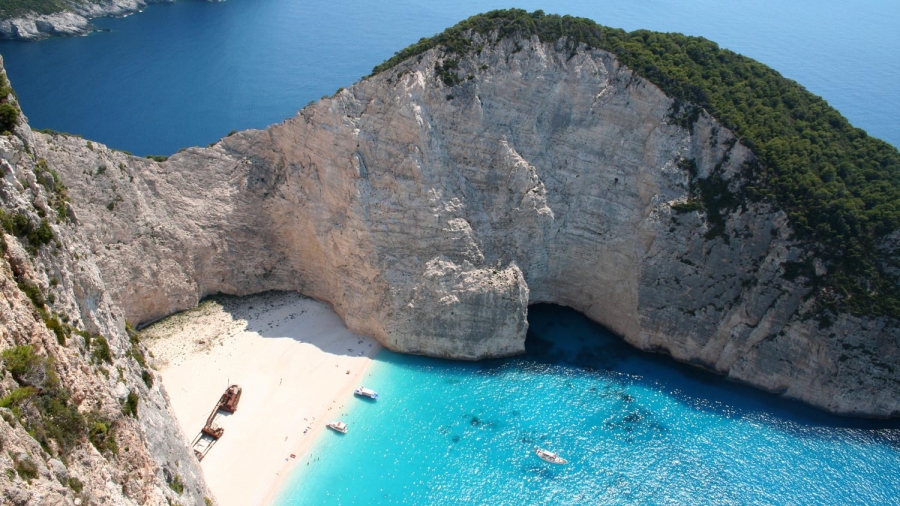 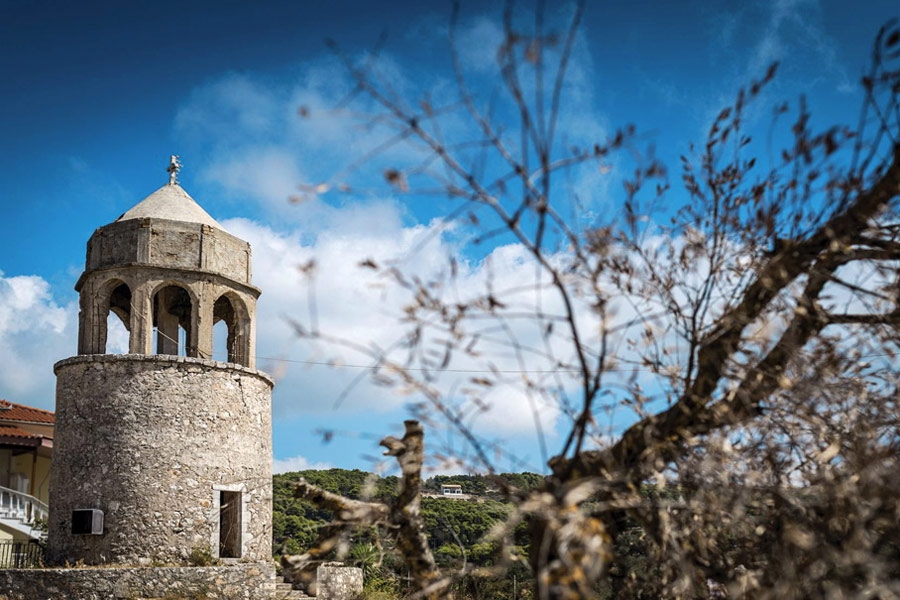 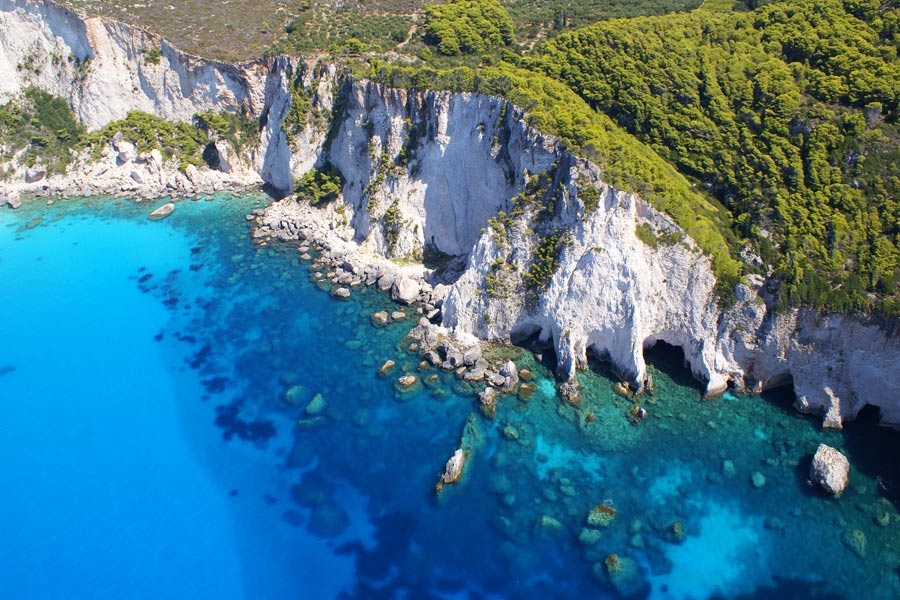 Lying off the west coast of Greece, one of the Islands that bathe in the blue of the Ionian Sea, Zakynthos is a place of sun-kissed sand, dramatic stone cliffs, and dusty green olive groves. It’s the birthplace of the national poet of Greece, Dionysios Solomos, who wrote the poem that was to later become Greece’s national anthem – no doubt inspired by the beauty of his Greek island home. Also known by its Italian name of Zante (the island was part of the Venetian Empire from the 16th to 18th centuries), the island is deservedly popular for its coves and beaches, which dissolve into crystal-clear waters.
Note: Car hire is recommended for exploring and to capture that all important snapshot of Navagio Beach of course - the iconic shipwreck is one of the things Zante is most famous for.

Zakynthos town, on the east coast of the island, is its capital. Though many of its grand Neoclassical buildings were lost in a powerful earthquake in 1953, its streets and squares are still a delightful place for a stroll, when you can stop at its pretty boutiques, or maybe at a taverna for a pita – filled with a delicious feta cheese, spinach or meat-stuffed puff pastry. Perhaps the best way to see the town, though, is from above. The village of Bochali is perched up on the hills about a mile and a half out of town, and in the cool shade of pine and olive trees, you can take in the view across to the port and the sparkling sea beyond. While you’re there, have a look at the picturesque ruins of the Venetian castle that once guarded Zante against seafaring invaders; you can still see the main gate and some outer walls and battlements, and the views seem all the more impressive from atop a castle turret.

Zakynthos is not short of beautiful beaches, and if you hop in a car and drive around the island you’re sure to find one beckoning to you with a sparkle in its eye. Laganas Bay, in the south, is a wide arc encompassing several gorgeous stretches of sand, and its beauty and ideal beach-bum conditions mean it’s perennially popular. It’s still worth a visit, however, especially if you’re interested in finding out more about one of Zakynthos’ more ancient residents. The loggerhead sea turtle (Caretta -  Caretta) is an endangered species that lays its eggs in the sand in summer, and there is a large population of turtles living around the bay. Laganas is now protected as a National Marine Park, so the public is only allowed on the sand between 7 am and sunset, and there are rules about where to set up and where to dig for sandcastles, to protect the turtles that come on to the beach at night to burrow and lay their eggs. If you’d like to learn more about these gentle creatures, you can visit the park's exhibition center in Dafni, at the east end of Laganas Bay.

Xigia Beach, up towards the north of the island, is another spot worth mentioning. A secluded cove nestled between the cliffs, it’s known for its sulfur springs, which mix with the salt water to make a natural beauty bath for your skin. The turquoise waters beckoning you as you stand on the cliffs above will make you want to strip down to your swimmers, but take care down the steep access path. There’s a parking area up at road level, and the local taverna has a terrace with a view – perfect for a fresh Greek salad, hot crispy fried fish, and a cold beer.

The most famous beach on the island, though, can only be reached by boat. Navagio Beach is probably the most photographed in Greece, and you can follow suit from a spot near the village of Anafonitria up above, but to swim in the gin-clear sea and sit on the sun-kissed stretch you’ll need to charter a boat, take a taxi-boat from the harbor at Agios Nikolaos, or join a round-the-island one-day boat excursion. The beach gets its name (‘navagio‘ means ‘shipwreck’ in Greek) from the wreck of a rusty ship that is believed to have been transporting contraband when it got caught in a storm and washed ashore in the early 1980s. The rusting hulk wedged in the golden sand against the bright-white cliffs is an Instagram magnet.

Stay in Zante between May and October, and enjoy a warm climate throughout. Long sunny days in July and August often see temperatures reaching above 30°C. Or, if you’d prefer something a little more on the mild side, visit the island in the balmy shoulder months and still see temperatures in the mid-20s

Laid back Zante is more about beachside dining and cocktails at sunset, than neon-lit strips. Kalamaki and  Tsilivi come to life at night with an array of bars and restaurants offering something to suit all tastes. Or there’s Zante Town, where you can enjoy a sophisticated night out in and around Solomos Square. For any real party-goers, Laganas is close enough for a night out but far enough away, never to be disturbed. The choice is yours!

Zante Town is the cultural hub of the island with museums, churches and castles dotted around this attractive seaside town. A large festival takes place in the town on 24th August, in memory of Agios Dionysos, the Patron Saint of Zante – the large street procession has a wonderful atmosphere and is not to be missed

Life in Zante centres around its crystal-clear waters, which are simply irresistible. There are lots of recommended boat trips, whether you fancy swimming in the turquoise blue caves, catching a glimpse of the endangered loggerhead turtles or paying a visit to the famous shipwreck at Navagio Beach. There’s also plenty to keep the kids entertained, including waterparks, fun parks and mini golf whilst culture vultures will love wandering the streets of Zante Town.

Like everywhere in Greece, Zante is the ultimate foodie’s paradise. Local specialties include souvlaki, moussaka, pita with gyros, sgatzeto, skartsofoli, pasteli, mantolato and fitoura. But don’t worry, if you’re not feeling adventurous, there’s an array of international options too, catering for all tastes.